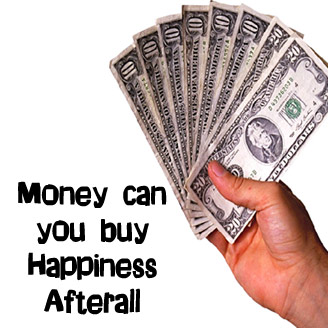 Everyone knows that money can’t buy you any amount of happiness. But now, researchers at the University of British Columbia and the Harvard Business School have found that it is possible to buy happiness for yourself, provided it’s when you spend money on others.

Through a number of studies, UBC assistant professor Elizabeth Dunn found that individuals report significantly greater happiness when they spend money in a prosocial manner. This refers to buying gifts for someone or donating to charitable institutions, rather than spending money on themselves.

“We wanted to test our theory that how people spend their money is at least as important as how much money they earn,” explained Dunn.

The researchers looked at a nationally representative sample of over 630 Americans, of who 55% were female. They asked participants to rate their general happiness, report their annual income and provide a breakdown of their monthly spending including bills, gifts for themselves, gifts for others and donations to charity.

The study also measured the happiness levels of employees at a firm in Boston before and after they received their profit-sharing bonus, which ranged between $3,000 and $8,000.

What affected the employees’ happiness, says Dunn, was not so much the size of the bonus but how they spent it.

The employees who devoted more of their bonus to gifts for others or toward charity consistently reported greater benefits than employees who simply spent money on their own needs.

Dunn said that these findings suggest that very minor alternations in spending allocations, as low as $5, may be enough to produce real gains in happiness on a given day.