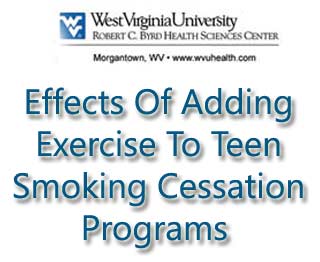 West Virginia University School of Medicine scientists are of the opinion that the addition of physical activity to tobacco cessation programs can really benefit participating teens. The associated study suggests a likely enhancement in cessation success.

As part of the investigation, the scientists analyzed 233 teens that were regular daily smokers and smoked at least about half a pack a day in the course of the week. Consuming nearly a pack in weekends, these teenagers were addicted and had begun smoking by the age of 11. A random selection from West Virginia high schools with above 300 students put up volunteers on brief intervention programs, teen-cessation program Not on Tobacco (N-O-T) or N-O-T plus physical activity (N-O-T + FIT).

“It is no secret that West Virginia has one of the nation’s worst smoking problems. In fact, a recent published report stated that West Virginia is among the seven states where people can’t quit,” Kimberly Horn, Ed.D., professor in the Department of Community Medicine, commented. “To the contrary, this study shows that West Virginia youth can quit smoking given the right tools. We simply need to get these tools in the community so that teen smokers can readily access them.”

It was observed that teens who had received the N-O-T + FIT program had higher chances of quitting the butt. Their chances ranged at 3 – 6 months from the time the program had started. On the whole, youth in the control group augmented their chances by almost double to continue smoking. Adding physical activity Horn mentioned boosted the effect for boys by high levels and brought down their risk by almost four times. Girls, though seemed to be more successful at quitting irrespective of whether or not they had the N-O-T program coupled with physical intervention in comparison to a brief intervention.

The scientist goes on to mention that additional studies are necessary to ascertain the kind of physical activity that may influence male and female teen smokers. They also intend analyzing if the intensity of exercise plays a role in the success rate of quitting smoking. According to the study, it’s quite likely that successful intervention of two health behaviors simultaneously is possible. The experts suggest that even if a small portion of time is committed at motivating teens to enhance their physical activity, they may benefit largely relative to smoking cessation.

The study will be published in the October issue of ‘Pediatrics’.