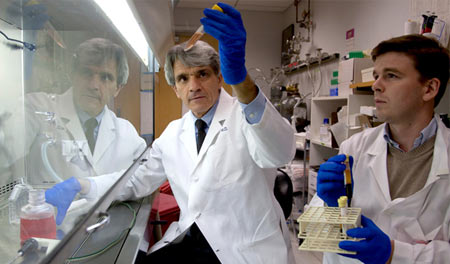 Multiple sclerosis is a serious autoimmune condition characterized by periodic attacks of neurological impairment. In this air of urgency for therapeutic options, an analysis by scientists from the University of California (UCSF) has identified a drug called Ocrelizumab which has awakened a ray of hope for the treatment of multiple sclerosis (MS) by showing positive results.

This Phase 2 clinical trial comprised 220 patients who were categorized into 4 teams. 2 of them were administered monoclonal antibody Ocrelizumab at 2 varying doses while another group received the normal MS drug namely interferon-beta. The third group was controlled and given a placebo.

The efficacy of each remedial measure was gauged through MRI scans that were examined by physicians for inflamed lesions, which signify the prevalence of MS. Also, other factors like intensity and incidence of neurological attacks that manifest in blindness, incoordination, weakness, numbness, and other effects, were scrutinized.

As per the outcomes, patients who were injected Ocrelizumab apparently performed better and showed fewer symptoms of the disease as compared to subjects who were exposed to a placebo or the standard interferon treatment. Cumulatively, the study showed that Ocrelizumab presumably led to 89% decrease in tumor formation and also seemed to cut the number of MS attacks over a span of 24 weeks. Interferon and placebo appeared to work along similar lines as seen in the scans.

“It really is a remarkable finding. This is extremely exciting, both in terms of the prospect of improved therapy for people with multiple sclerosis but also for the lessons that it teaches us about the fundamental cause of the disease. The prospect of an extremely effective therapy for multiple sclerosis that can be safely administered at six month intervals could represent a major step forward, if the safety profile and benefits are sustained over longer periods of use,” explained Stephen Hauser, MD, the Robert A. Fishman Distinguished Professor and chair of the Department of Neurology at UCSF who was the senior author on the study.

However, some adverse events were reported at the end of the trial where one patient on Ocrelizumab died, but the link between the study drug and mortality is not clear as yet. Further analyses will test the drug’s effect and safety in the long run.

The findings are published in the journal, Lancet.