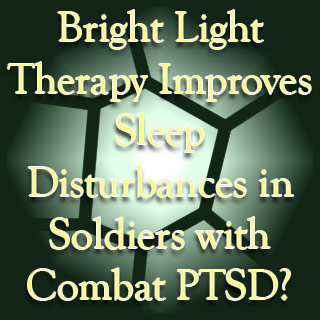 Sleep disturbances often include difficulty falling asleep when you first go to bed at night, waking up too early in the morning and waking up often during the night. Sleep disorders linked with combat related PTSD were found to be considerably affected by bright light therapy. Bright light therapy exposes your eyes to strong but harmless amounts of light for a definite and regular length of time. It involves exposure to up to 10,000 lux of light for scheduled periods of 20 minutes or more with the help of a small light box.

Findings reveal that bright light therapy greatly improved sleep disturbances related to PTSD as compared to placebo. It was also observed that the therapy improved PTSD symptoms and depression. The study involved 16 soldiers serving operation freedom or operation Iraqi freedom and who had combat-related PTSD. After one week baseline these participants were randomized to one of the two four-week treatments. Eight soldiers received 10,000 lux of bright light therapy for 30 minutes each day. The other eight soldiers were enrolled to the placebo group and with the help of an inactivated negative ion generator the participants received sham treatment.

“Disturbed sleep is known to interact with depression and anxiety in a vicious cycle,” mentioned study coordinator Shannon Cornelius, PhD, graduate study assistant for Dr. Shawn D. Youngstedt in the department of exercise science at the University of South Carolina in Columbia, S.C. “By reducing the severity and occurrence of sleep disturbances, it may be possible to reduce the severity of symptoms such as anxiety and depression in combat-related PTSD.”

The Clinician-Administered PTSD Scale (CAPS-2) was completed at baseline and immediately after the entire study. With the help of beck depression inventory (BDI-II), depression was examined at weekly intervals and with the help of Pittsburgh Sleep Quality Index (PSQI) with addendum for PTSD (PSQI-PTSD), sleep quality was analyzed. Cornelius identified that sleep disturbance was a common problem accelerating and continuing in PTSD which made it an important target for treatment.

The American Academy of Sleep Medicine reports that 70 to 90 people affected with PTSD characterize sleep disturbance. One of the most common problems of PTSD is the recurring nightmares of the traumatic event. These nightmares apparently may take the form of a normal reliving of the disturbing event or portray only some of its elements. Youngstedt reported in a 2007 published study in the journal BMC Psychiatry that bright light therapy may reduce the anxiety among the patients. It was revealed that in a group of low-anxiety adults three hours of exposure to 3,000 lux of bright light for three consecutive days lowered the anxiety levels.

This study was presented on Monday, June 7, 2010, in San Antonio, Texas, at Sleep 2010, the 24th annual meeting of the Associated Professional Sleep Societies LLC.