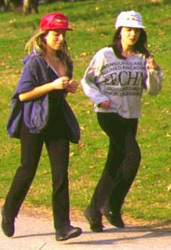 Here’s some good news- It’s never too late to start exercising! Former couch potatoes who begin to exercise regularly, after the age of 40 can reduce their risk of heart disease by half, compared with their peers who remain sedentary.

Researchers from the University of Heidelberg in Germany re-analysed data from a study of coronary heart disease that included 312 heart disease patients between 40 to 68 years old who were matched by age and sex to 479 healthy people. Study participants were asked about their patterns of physical activity since age 20. Those who reported being somewhat or very active throughout their adulthood had a 62-percent lower risk of heart disease compared to people who had not exercised in adulthood at all.

However, people who said they were sedentary from age 20 to 39 but took up exercising at age 40 or later, cut their heart disease risk by 55 percent. Risk reduction was greatest among those who became very active. These “later-life athletes” actually fared better than people who were active in their twenties and thirties but took to the couch after 40, who showed a 35 percent lower risk of heart disease than people who were completely sedentary.

These results suggest that keeping up a physically active lifestyle in adulthood may be beneficial for preventing coronary heart disease later in life. Furthermore, the data provides evidence that changing from a sedentary to an active physical activity pattern, even if initiated at an older age, may result in a strong reduction of coronary heart disease risk.

There is enough evidence which shows that moderate exercise may be enough for individuals who are less fit. But benefits will be the strongest for people who start out being active and stick with it throughout life. Thus encouraging participation in physical activity should start at an early age. But for those who have been inactive for most of their adulthood, it is never too late to start!