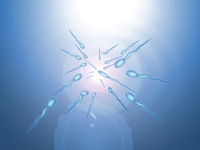 British clinics that treat couples with fertility problems are suffering from a major sperm shortage after the authorities lifted donor anonymity in April last year. Now a child born thanks to a donation is able to discover the identity of the donor once they reach the age of 18.

Previously, donor children were only able to obtain non-identifying information and to verify that they were not genetically related to their partner’s family.

Donors of fresh sperm will have their anonymity lifted next year.

California has allowed publication of the identities of donors since the early 1980s. In Europe, Sweden lifted anonymity in 1984, followed by Norway, the Netherlands and Iceland.

In France, a proposal was submitted in June to create a so-called “double counter”: one with identified donors, and one with anonymous ones. Future parents would be able to choose between the two.

The new technique, intra-cytoplasmic sperm injection (ICSI), means in-vitro fertilisation for an egg with the sperm of the future father after natural attempts at conception have failed.

The British Fertility Society (BFS) says it is “well aware of the difficulties many patients throughout the country are experiencing” and noted that the BBC’s investigation “reinforces our own findings that many clinics are now finding it impossible to provide these services”.

A group study set up by the society should “shortly” deliver recommendations to the health ministry, said Dr Mark Hamilton, its president.

But the new legislation is not retrospective, so new requests for the identities of today’s donors should start appearing only in 2023. According to the HFEA, those who have made donations between 1991 and 2005 can voluntarily relinquish their anonymity.