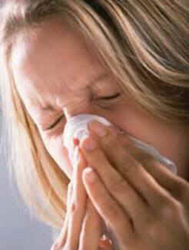 Many people carry Staphylococcus aureus, a potential disease-causing microbe, in their nose. Now, new research shows that large amounts of this organism and other bacteria are released into the air with every sneeze.

While the presence of the common cold does not affect this dispersion, allergies seem to increase it.

“Our findings suggest that sneezing contributes to the risk of cross-infection by airborne transmission of S aureus, coagulase-negative staphylococci (CoNS), and probably other bacteria, and they should be taken into consideration in future investigations of outbreaks,” report Dr Werner E Bischoff, from Wake Forest University in Winston-Salem, North Carolina, and colleagues.

Airborne dispersal of Staphylococcus aureus was measured before and after histamine-induced sneezing, both before and during experimentally induced colds.

The measuring technique involved having each volunteer sit in an airtight chamber built around a biological safety hood. Air samplers were used to measure airborne bacteria.

Sneezing increased the airborne dispersal of S aureus, CoNS, and other bacteria by up to nearly fivefold.

As noted, having a cold did not influence bacterial dispersal. By contrast, having a respiratory allergy increased S aureus spread during sneezing by almost fourfold.

“Further studies are necessary to clarify the underlying mechanisms of allergies of the respiratory tract and S aureus airborne dispersal,” the researchers note