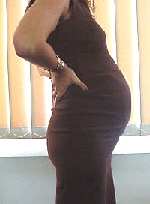 Annette Briley and colleagues from Tommy’s Baby Charity here surveyed 1,000 women about how they felt during pregnancy.

The survey found that three in five women were surprised by how emotional they felt while being pregnant. Two thirds felt even more exhausted than they expected and more than half needed more reassurance than they would have anticipated.

Current estimates in Britain suggest that one in 10 women suffer from depression during pregnancy, experiencing symptoms such as low self-esteem, irritability and pessimistic thoughts about the future.

A recent study in the British Medical Journal found that of 9,000 pregnant women, 12 percent were depressed at 18 weeks, rising to 13.5 percent by week 32. However, the study by the University of Bristol found that eight weeks after giving birth, depression rates fell to 9.1 percent.

“The transition from adulthood to parenthood is a massive life change and people put pressure on themselves to be perfect,” said Briley who works as a midwife at the St. Thomas’ Hospital here. “Previous generations thought ‘to be good enough was okay’. Now people think they have to be the best.”

Briley added that the pressure to match up to celebrities, who bloom during pregnancy and then bounce back into shape within weeks of giving birth, could trigger low self-esteem in some women.

Those who are depressed should seek medical advice as they could be helped by counselling or support groups, Briley said.