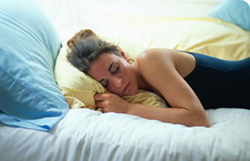 A disorder called “periodic leg movement during sleep” (PLMS) may be more common in older women, U.S. researchers report. PLMS involves uncontrollable, repetitive tightening or flexing of leg muscles and is distinct from another condition, “restless legs syndrome,” in that it usually only occurs during sleep.

Researchers at the University of California, San Francisco, noted that PLMS can lead to long-term health problems and they urged people with the disorder to consult with a sleep specialist.

Women whose sleep was disrupted by PLMS had a significantly higher arousal index, lower sleep efficiency, a higher percentage of sleep in stages 1-2, and a lower percentage of stages 3-4 and REM, the study said.