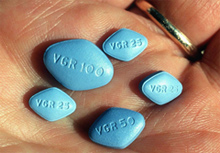 Sex is not the only thing that women, whose partners pop impotency drug Viagra, will be getting, for also in store for them is the snoring that the pill is prone to cause the men. A study by researchers in Brazil has found that the sex pill aggravates sleep apnea — a condition which causes a snoring racket.

The study found that that found men on Viagra were twice as likely to experience sleep apnea. Sleep apnea is a common disorder that can be very serious.

In sleep apnea, breathing stops or gets very shallow while a person is sleeping. Each pause in breathing typically lasts 10 to 20 seconds or more. These pauses can occur 20 to 30 times or more an hour.

The most common type of sleep apnea is obstructive sleep apnea. During sleep, enough air cannot flow into the lungs through the mouth and nose even though a person may try to breathe.

When this happens, the amount of oxygen in the blood may drop. Normal breaths then start again with a loud snort or choking sound.