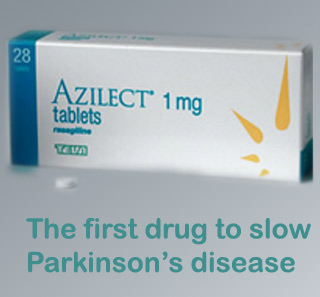 A new drug by Teva Pharmaceutical Industries Ltd, an Israeli firm brings in new hope for Parkinson’s patients. Research indicates that the drug rasagiline, also known as Azilect appears to slow the degeneration in Parkinson’s disease.

The first drug of its kind, on administration at an early stage showed a significant decrease in the advancement of the serious brain disease. Present treatment of Parkinson’s sufferers comprises of drugs that target only at the symptoms of the condition. Symptoms include shakes, memory loss, hallucinations and stiffening of muscles.

One of the authors of the study, Professor David Burn of Newcastle University, remarked, “They show that early treatment can result in a slowing of clinical progression”

Describing the study as exciting professor David along with his colleagues conducted a Phase III trial that studied the effects of the wonder drug. The study included 1,176 patients in the early stage of the disease. Results of the trial suggest that subjects who were given an Azilect tablet once a day for 72 weeks showed a slow development of the disease as against those who received a placebo for the first 36 weeks before being treated with Azilect.

The team further revealed that the patients who took the drug soon after diagnosis suffered from a less aggressive form of Parkinson in comparison to those who took it much later. Within months of diagnosis administration of the drug could significantly delay the onset of more severe symptoms, according to researchers.

The makers of this novel drug are now in talks with regulators to expand the official labeling of its approved uses so that they can include disease modification. Currently the drug has already got an approval by the National Institute for health and Clinical Excellence (NICE) to treat symptoms of the serious neurodegenerative condition.

An estimated 120,000 people in Britain are victims of Parkinson’s disease with nearly 10,000 cases being diagnosed every year. The symptoms of the disease usually appear slowly and are known to progress with time. Although some sufferers may develop the condition in their 40s, most of them are diagnosed with Parkinson only in their 60s or early 70s.

These findings were unveiled at the European Federation of Neurological Societies Congress in Madrid.