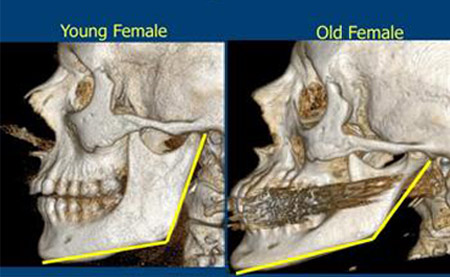 Facelifts and other wrinkle-reducing processes have supposedly long been sought by people wishing to deflect indications of aging. But a new study from the University of Rochester Medical Center proposes that it may take more than tightening loose skin to reinstate a youthful look. This study signifies that considerable variations in facial bones, predominantly the jaw bone, seem to take place as people age and add to an aging appearance.

The study proposes that the future approach to facial rejuvenation could be two-fold, first reinstating structure underneath prior to conducting skin-tightening procedures. Assessing a group of roughly 120 facial CT scans taken for other, unconnected medical reasons, plastic surgeons apparently gauged variations that cropped up in facial bones over time. The CT scans were split evenly by gender and age, around 20 men and roughly 20 women in each of three age groups namely young i.e. ages 20-36, middle i.e. 41 to 64 and old i.e. 65 and older.

Experts applied a computer program to compute the length, width, and angle of the mandible, or jaw bone, for every scan, and pit the outcomes of each group against each other. Utilizing CT scans for this study apparently enabled a more precise three-dimensional reconstruction and augmented precision of measurements.

The angle of the jaw presumably augments noticeably with age, which appears to lead to a loss of definition of the lower border of the face. Jaw length apparently reduces considerably in comparisons between the young and middle age groups, while the decline in jaw height from the middle to old group seemed to be remarkable.

Howard N. Langstein, M.D., professor and chief of Plastic and Reconstructive Surgery at the University of Rochester Medical Center, commented, “The jaw is the foundation of the lower face, and changes to it affect facial aesthetics. These measurements indicate a significant decline in the jaw’s volume as a person ages, and therefore less support of soft tissue of the lower face and neck.”

This loss of bony volume may add to baggy facial skin, reduced chin projection, and loss of jaw-line definition. As jaw volume reduces, soft tissue of the lower face seems to encompass less support, thereby leading to a softer, oval appearance to the lower face and sagging skin, which may also influence the aging appearance of the neck.

Langstein stated, “Physicians have long been taught that facial aging is caused by soft tissue descent and loss of elasticity. Though we have always known that bones change over time, until now, the extent to which it causes an aged appearance was not appreciated.”

The study by Langstein and plastic surgery resident Robert Shaw, M.D., provides proof that facial bones could be always subjected to forces that change them. Comprehending there could be predictable alterations in facial bone structure as people age offers physicians new insight into procedures that may effectively bring back youthful appearance.

The study was published in the Journal of Plastic and Reconstructive Surgery.