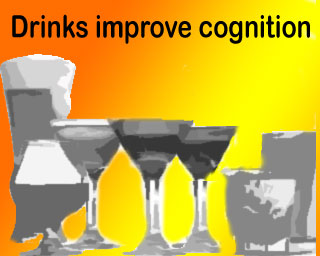 As we have celebrated New Year’s Eve, a latest research has come as a pleasant surprise for all you booze-lovers. According to this research, moderate alcohol drinkers stand a better chance of avoiding Alzheimer’s disease and other cognitive loss, as compared to their non-drinking counterparts.

Apparently these researchers evaluated around 44 studies, in order to verify their findings. It’s said that in more than half of these studies, conducted almost two decades back, moderate drinkers of wine, beer and liquor stood at a lesser risk of developing dementia, as compared to non-drinkers. However, it’s even pointed out that some of the evaluated studies revealed an increased risk associated with drinking as well.

Lead author Michael Collins, Ph.D., a professor and neuroscientist, Loyola University Chicago Stritch School of Medicine, says that, “Alcohol is a two-edged sword. Too much is bad. But a little might actually be helpful.”

Some believe that moderate alcohol consumption, inclusive of cardiovascular benefits, also aids in the reduction of the chances of mini strokes. Collins, on the other hand, seemingly suggests that small amounts of alcohol may actually make the brain cells healthier and fit. Apparently, moderate levels of alcohol lays stress on the brain cells, which in turn trains the brain to deal with much higher levels of stress later on, which may prove to be the potential cause of dementia.

The researchers warn that alcohol consumption should evidently be undertaken responsibly and in moderation. However the researchers suggest abstainers to avoid alcohol, since it may most likely be abused. Besides alcohol, the researchers have identified various other foodstuffs and activities that may aid in the risk against dementia. They recommend, exercise, education, consumption of green tea, fruits, vegetables, nuts, seeds, etc among others.

Collins concludes by pointing out that there are various occasions when drinking any amount of alcohol should be refrained from, like adolescents, pregnant women and also before driving.

Their report is available online and is soon believed to be published in the Alcoholism: Clinical and Experimental Research journal.