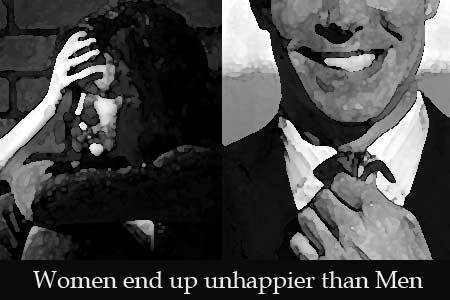 Women have always leaned towards the mushy side of their emotions and we often get to see them brooding over small matters in life. Although women may have stepped into various fields of operation and they have battled the male-dominant society and stood up on their feet proudly, but they end up unhappier than men later in life, reveals new research by Anke Plagnol of the University of Cambridge, and University of Southern California economist Richard Easterlin.

As per the research, although women start off being happy and cheerful but at the end they tend to be less happy in comparison to men. Plagnol and Easterlin’s study, forthcoming in the Journal of Happiness Studies happened to be the first to use nationally representative data which covered several decades to examine the role of unfulfilled desires in a person’s sense of well-being. Targets and measurement of success may vary among those raised in different generations and data sets from a range of time periods may also have varying demographic compositions.

“Differences between men and women in aspirations for marriage and children are fairly small,” commented Plagnol, who received her Ph.D. from USC in 2007. “Gender differences in satisfaction depend largely on attainment.”

The study also found that young men are also more dissatisfied than young women due to the financial worries. But as the ages go up, the worries for men die out and the emotions start playing up the other way round and thus results into women being unhappy later in their life. As the age increases, men are at peace with financial situations and possess increased spending power as well.

These findings are consistent with an earlier study by Easterlin showing that recent generations are less satisfied than previous generations, despite having more.