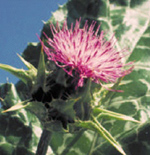 A herbal medicine that is extracted from seeds of the Silybum marianum (silimarin), which is better known as milk thistle, may help sugar-control in people with type II diabetes. Research shows that this extract can help people significantly lower the amount of sugar bound to haemoglobin in blood, as well as reducing fasting blood sugar levels.

Silymarin contains a number of active constituents called flavolignans which are also used to help protect the liver from poisoning.

“We don’t know the exact mechanism of action for this effect, but this work shows that silymarin could play an important role in treating type II diabetes,” says lead author Fallah Huseini, who works at the Institute of Medicinal Plants, which is based in Tehran, Iran.

The data came from a randomized double-blind clinical trial involving 51 people who had had type II diabetes for at least 2 years. One group of 25 patients received 200 mg of silymarin three times a day for 4 months, while the remaining 26 received a placebo treatment.

All of the patients continued to use conventional oral hypoglycaemic treatment during the trial. Patients were examined at monthly intervals.

Compared with the beginning of the trial, the treatment group had a significant reduction in fasting blood glucose level (p<0.001), and a reduction in glycosylated haemoglobin (p<0.001). Both of these measures rose significantly in the placebo group (p<0.0001). There were also non-significant decreases in blood lipids in the treatment group. "The results are very encouraging, and we now need to do further large multi-centre studies," says Huseini.