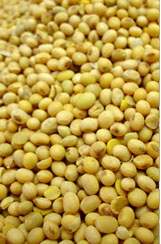 Soy yogurt, especially with fruit in it, may help control both type 2 diabetes and high blood pressure, U.S. researchers reported on Thursday. Although people with diabetes are usually discouraged from eating sweet snacks, soy yogurt and some dairy yogurts rich in fruit seem to help regulate enzymes that affect blood sugar levels, the researchers report in the Journal of Food Biochemistry.

“What one eats should be part of an overall approach to therapy,” said Kalidas Shetty of the University of Massachusetts Amherst.

Type 2 diabetes, which affects more than 15 million Americans and up to 150 million people globally, is characterized by an abnormal rise in blood sugar right after a meal. This effect, known as hyperglycemia, can damage blood vessels, the kidneys, heart, eyes and nerves.

Shetty and his team went to a local supermarket and bought peach, strawberry, blueberry and plain yogurt made by four different producers, including a soy brand.

Tests in their lab showed that soy blueberry yogurt strongly affected all three of the enzymes. Peach and strawberry yogurt also affected alpha-amylase and alpha-glucosidase.

The researchers tested the yogurt varieties for antioxidants and plant compounds called phenols. Phenols and polyphenols give red wine and tea some of their heart-healthy benefits.

Plain soy yogurt was the most potent, with blueberry dairy yogurt scoring second on phenol and antioxidant content, the researchers said.

Soy yogurt was also the best at inhibiting ACE, which causes blood vessels to narrow and raises blood pressure.

“Cost-effective dietary changes are essential for fighting this disease, and traditional diets that have a higher content of these protective antioxidants are an important part of the solution,” Shetty said.

“We should be able to use diet along with other therapies, and diabetes is a disease where this especially makes sense.”
Diets rich in fruits and vegetables, along with regular exercise, can prevent and help control diabetes and high blood pressure alike.