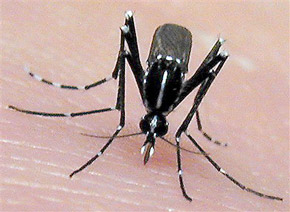 A simple examination of the eyes can diagnose cerebral malaria in children, according to a new study. Cerebral malaria, a severe complication where the Plasmodium falciparum parasite infects capillaries that flow through the tissues of the brain, is difficult to detect as patients can be unconscious and have a number of other illnesses.

Researchers led by Nick Beare of the Royal Liverpool University Hospital analysed the retinas of 45 children admitted to hospital in Blantyre, Malawi, with cerebral malaria.

They found that white opaque patches and whitened blood vessels on the retina were unique signs of cerebral malaria. Other signs include bleeding of the retina and swelling of the optic nerve.

The new diagnosis requires an instrument called an ophthalmoscope, which is commonly used in Africa for studying eye disease.

“Diagnosis requires special training in eye examination but is relatively straightforward and cost effective, which is essential in resource-poor settings such as Africa,” said Beare.