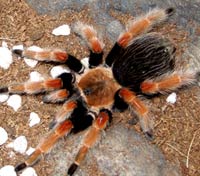 Scientists at the University of California have discovered that venom from a West Indian tarantula causes pain by exciting the same nerve cells in mice as the hot, spicy ingredient in chilli peppers.

The study demonstrates that some plants and animals have evolved the same molecular strategy to deter predators – triggering pain by activating a specific receptor on sensory nerves.

The researchers said that their study provides new tools to understand how these pain- and heat-sensing neurons work, and to help develop drugs that ease persistent.

Their findings, which are based on studies of mice cells in culture and live mice, is published in the November issue of the journal Nature.

The tarantula venom targets the heat sensor on nerve cells known as the capsaicin receptor, first cloned in 1997 in the Julius laboratory. In the last 10 years, Julius and his colleagues have demonstrated that this and related receptors trigger nerves to fire pain signals when exposed to heat or the fiery properties of peppery food, mustard oil and other compounds.

The researchers said that human pain-sensing neurons also have these receptors on their surface.

The capsaicin receptor acts as a channel on the nerve surface. When certain compounds bind to it, the receptor channel opens, allowing a stream of charged sodium and calcium molecules to rush into the nerve cell. This generates an electrical signal that travels to the brain to produce pain.

“It is fascinating that plants and animals have evolved the same anti-predatory mechanism to generate noxious sensations,” Julius said.