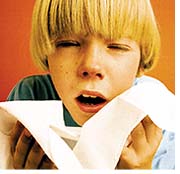 A new report states that new born delivered by women who experience certain complications during pregnancy and delivery are at a greater risk for developing specific patterns of wheezing.

Wheezing is basically the term used by doctors and nurses to describe the sound that they hear in the lungs of patients who have an obstruction in the airways, especially when the wheezing patient is blowing air out of the lungs (exhaling). Many times asthmatics who are uncontrolled will be wheezing. Notably, many asthmatics do not wheeze, even when they are having severe breathing problems due to the build up of mucus in their tightening bronchial tubes.

Commenting on the study, Dr. Franca Rusconi said, “This study adds weight to the epidemiological data which suggest that early development has significant consequences in disease risk not only in childhood (our study), but also throughout life.”

Rusconi from the University of Florence, Italy and colleagues in the SIDRIA Collaborative Group evaluated the associations between maternal medical complications and procedures during pregnancy and at delivery and the risks of various wheezing disorders — transient early wheezing, persistent wheezing and late-onset wheezing – in 15,609 children between 6 and 7 years old.

The team discovered that 9.5 percent of the children had transient early wheezing, 5.4 percent had persistent wheezing, and 6.1 percent had late-onset wheezing. Preeclampsia or high blood pressure requiring therapy was associated with an increased risk of all three wheezing types, the investigators report, increasing the odds by 40 percent, 59 percent, and 47 percent, respectively. Maternal diabetes was associated with a 72 percent increased risk of persistent wheezing.

Amniocentesis or chorionic villus sampling, cesarean section, and weight gain during pregnancy were not significantly associated with childhood wheezing, the investigators report in the American Journal of Respiratory and Critical Care Medicine.

Though a maternal history of asthma and/or allergy was also associated with wheezing in childhood, this history did not modify the association between maternal complications or procedures in pregnancy and at birth and wheezing phenotypes, the report indicates.

“If these findings are causal, they are generally consistent with the concept of ‘programming,’ which occurs when an event in a critical early period of an organism’s life permanently changes its structure or function,” Rusconi and colleagues write.

In a related editorial, Drs. Andrew Bush from Royal Brompton Hospital, London, and Dr. Isabella Annesi-Maesano from Medical School Saint-Antoine, Paris, say the study “is observational and hypothesis generating,” and that “its major service is to point to early life events as the source of lifelong problems.”

The editorialists conclude: “Perhaps more attention needs to be paid by clinicians to what happened to a child at these crucial times, and researchers need to consider whether they are looking for answers or to test interventions long after the horse has left the stable, and disappeared over the horizon.”

In a concluding comment, Rusconi maintained “It is very important to follow up pregnancies carefully (and this could be a problem, at least in our settings for less educated women) and, possibly, to take into consideration also less severe forms of disease, such as gestational diabetes, mild gestational hypertension, asymptomatic bacteriuria, and chorioamnionitis.”