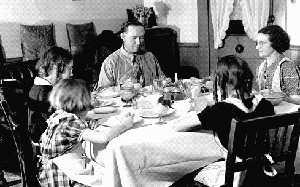 A study conducted by the new University of Missouri-Columbia claims that the key for children not becoming overweight, is by sitting down to a family meal more often and cutting down on television watching, which is surely beneficial for children.

The study, which was funded by the United States Department of Agriculture, was published in this month’s issue of the Journal of the American Dietetic Association.

Sara Gable, associate professor of human development and family studies in the MU College of Human Environmental Studies said, “Other research has shown that children who eat meals with their families eat more healthy foods than children who don’t eat as many meals with their families. I suspect there are other benefits of family meal times that protect children from developing some of the habits that could lead to weight problems.”

Members of the persistently overweight groups also lived in neighborhoods that parents perceived as less safe for outdoor play.

“These results suggest that some overweight children have fewer options for active play when they are at home,” Gable said.