Are you a stroke survivor? Or do you have anyone in your family who has suffered from stroke a long time back? Well, its time not to frown on being a stroke victim and move on. Move on treadmill, that is! Yes, because a treadmill has found to have marvelous effect on brain, even better than traditional physiotherapy, that helps improve stroke survivors’ walk ability. 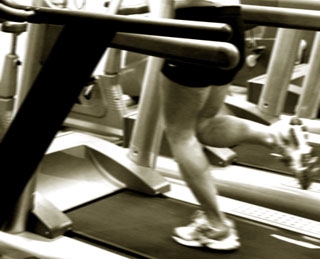 “This is great news for stroke survivors because results clearly demonstrate that long-term stroke damage is not immutable and that with exercise it’s never too late for the brain and body to recover,” said Dr. Daniel Hanley, from Johns Hopkins University, in Baltimore, who carried out the research.

Apparently, around 150,000 people in Britain alone suffer from stroke every year.

It seems that even three days in a week of working on a treadmill can “rewire” the brain and improve their ability. The stroke victims usually ignore a rehabilitation process or physiotherapy out of loss of interest and no hopes of recovering back from the stroke. They face two problems owing to lack of exercise which are not walking properly and low cardiovascular fitness explains study researcher Dr. Andreas Luft, a professor of clinical neurology and neurorehabilitation at the University of Zurich in Switzerland.

These problems seemed to have reduced in 37 stroke patients that were instructed to work on a treadmill three days in a week. There was another group of 34 stroke patients that were asked to continue with the normally recommended stretching exercises. The group of 37 showed 51 percent of increased walking velocity and while the latter group showed just 11 percent of improvement.

As far as the cardiovascular fitness is concerned, it improved by 18 percent in treadmill group and 3 percent in the stretching group. Surprisingly, one patient showed improvement even when it had been two decades since he suffered stroke.

These findings should make all the stroke survivors jump to joy on the treadmill as working on it is not only improves health, but also brings back the lost fun.