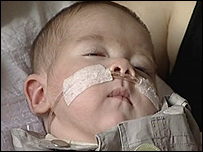 A severely premature born baby’s life has been saved thanks to the anti-impotence drug Viagra, which the English doctors used in order to save the life of the newborn.

Lewis Goodfellow – who was born at 24 weeks, was given the drug by the doctors at the northeast city of Newcastle upon Tyne. Goodfellow weighed a meager one pound, eight ounces (780 grammes) – as one of his lungs failed and not enough oxygen was getting into his bloodstream.

The drug opened up tiny blood vessels in his lungs, letting oxygen to be captured and flow around the body. Goodfellow, born in August 2006, was finally allowed home last month.

Alan Fenton, consultant neonatologist at the city’s Royal Victoria Infirmary, said although oxygen can be pumped into the lungs of premature babies with breathing difficulties, there was not enough blood supply to carry it elsewhere.

Fenton told BBC News Online, “What Sildenafil (Viagra) does is open up the blood vessels so they can capture the oxygen and take it around the body.”

Lewis’s mother, Jade Goodfellow, and father, John Barclay, were so concerned their son was going to die that they began planning his funeral until doctors told them Sildenafil might work.

“I don’t think you could put into words how we feel,” his mother said. “The doctors are worth their weight in gold. We admire each and every one of them for what they have done.”

Viagra has been used to treat six premature babies, doctors at the hospital note.