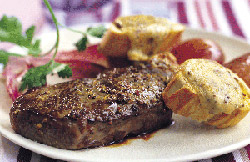 A new US study says that men whose mothers ate a lot of beef during pregnancy may just have lower sperm counts.

Professor Shanna Swan and other researchers at the University of Rochester examined sperm counts among US men born between 1949 and 1983. They found those whose mothers ate more than seven beef meals a week had an average sperm concentration of 43.1 million sperm per millimetre of seminal fluid.

In contrast, the sons of mothers who ate less beef had an average of 56.9 million sperm.

Among sons of mothers who ate a lot of beef, 17.7 percent had a sperm concentration below the WHO sub-fertility threshold of 20 million sperm per millimetre of seminal fluid.

The figure for the sons of lower beef consumers was 5.7 percent, according to the research published in the journal Human Reproduction.

The findings suggested that exposure to growth promoters contained in the beef eaten by the boys’ mothers was to blame, Swan said.

However, she admitted the research team had no specific data on which chemicals the meat contained, and conceded other possible causes such as exposure to pesticides or lifestyle factors could not be ruled out.