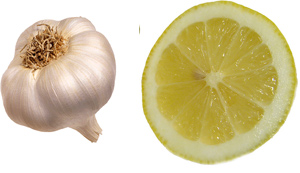 Bleeding gums is a very common problem amongst many. A new study has claimed that consuming garlic and lemon daily could help to push up the level of vitamin C and thus stop the gums from bleeding.

The study claims that consuming two grams of garlic and a medium sized lemon a day can prevent this from happening.

The study was conducted by a team of researchers of the Department of Physiotherapy and Sports Science at Punjabi University. The team was lead by Dr. MS Sohal.

The study claimed to have found that the antioxidant effect of vitamin C appears to accelerate healing in bleeding gums with the use of garlic paste.

The researchers observed the effect on 67 people, both smokers as well as non-smokers, who took garlic and lemon water (without salt and sugar) each day while being in a fasting state.

By the end of the four-week study, the non-smokers had a higher level of Vitamin C in the blood . In non-smokers vitamin C rises to 60 per cent and in smokers to only 25 per cent.

In the case of smokers there was only a small change in the bleeding of gums due to less increase in the level of vitamin C.

The study observed that lemon water, which contains vitamin C functions as an antioxidant, while garlic can completely cure bleeding gums.