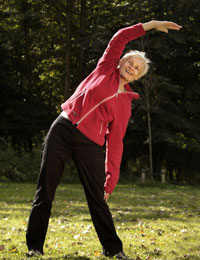 Forget miracle pills, elixirs of life and potions, because the key to eternal youth could be as simple as going to the gym. Scientists have shown that pensioners who use weights regularly have almost as much energy as people less than half their age.

In fact, just six months of gentle weight training is enough to turn back one of the body’s molecular clocks and rejuvenate ageing muscles to the point where they are almost as powerful as those found in someone in their 20s or 30s.

Researcher Simon Melov, an expert in how aging effects the body, looked at how exercises affected the muscles of a group of pensioners said that these findings gave “credence to the value of exercise, not only as a means of improving health but of reversing the aging process itself.”

As part of the study, men and women, all over 65, were asked to spend an hour at the gym twice a week, pumping iron and doing other exercises that build strength.

After six months, the pensioners, who had an average age of 70, were much stronger than before. But, most interestingly, the natural process of muscle ageing seemed to have been reversed.

However, in the men and women who ere studied, exercising reinvigorated their muscle mitochondria to such an extent that by the end of the study, the tiny structures were almost as powerful as those found in people aged 20 to 30 years old.

Four months after the study concluded, these people gave up going to the gym, but they still continued to exercise using soup cans and other household items as makeshift weights.

Co-researcher Mark Tarnopolsky said, “They were still strong, they still had the same muscle mass. This shows that it’s never too late to start exercising- and that you don’t have to spend your life pumping iron at the gym to reap benefits.”