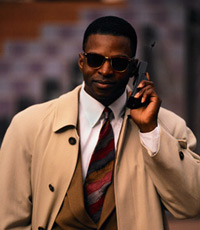 Have you ever experienced a headache after talking on your cell phone? If you do, it’s all in your mind, suggests a Norwegian study.

Instead people who experience such symptoms do so because they expect they’ll occur, the findings suggest.

Dr. Gunnhild Oftedal and associates at the Norway University of Science and Technology in Trondheim recruited 17 subjects who “regularly experienced pain or discomfort in the head during or shortly after cellphone calls lasting between 15 and 30 minutes.”

The participants were tested during cellphone radio frequency exposure and sham exposure, without knowing which session was which.

As reported in the medical journal Cephalalgia, the subjects said they felt an increase in pain or discomfort during 68 per cent of all trials.

The researchers observed no statistically significant correlations between actual exposures and the subjects’ reports of symptom severity, and no effects of exposure on changes in heart rate or blood pressure.
Oftedal’s team concluded the most likely explanation “is that the symptoms are due to negative expectations.”