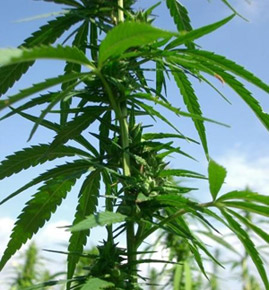 Latest research has suggested that cannabis, also known as marijuana or ganja, can help in the treatment of allergies and autoimmune disorders that occur when body tissues are attacked by its own immune system.

Researchers led by Andreas Zimmer, at the University of Bonn, used tetrahydrocannabinol (THC), the active ingredient in the cannabis plant to treat mice and found that it reduced skin allergies.

However, the researchers warned that people who currently suffer from autoimmune diseases should not try to self-medicate marijuana because of its side effects, reported the online edition of the New Scientist.

The human body contains endocannabinoids, which are marijuana like substances. They are produced in the body naturally.

The researchers created a group of mice that lack the receptor for endocannabinoids and noticed that the mice soon developed a severe skin allergy to the nickel in the metal tags the researchers had fastened to their ears.

Zimmer set up a series of experiments to test the anti-allergy effect of natural and synthetic THC compounds and found that they reduced skin irritation by half.

The researches also said they found that mouse skin cells exposed to synthetic THC release fewer cytokines, chemicals that attract immune cells to the site of infection or irritation.