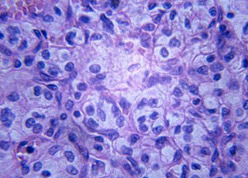 American scientists have managed to develop a minimally invasive method to treat cancer in hopes to begin clinical trials on individuals with prostate cancer very soon.

The development of the process called irreversible electroporation (IRE) is a result of the efforts of Virginia Techbiomedical engineer Rafael V. Davalos and University of California bioengineering professor Boris Rubinsky.

According to Davolos, “IRE removes tumors by irreversibly opening tumor cells through a series of short intense electric pulses from small electrodes placed in or around the body.”

“This application creates permanent openings in the pores in the cells of the undesirable tissue. The opening eventually lead to the death of the cells without the use of potentially harmful chemotherapeutic drugs.”

‘We did not use any drugs, the cells were destroyed, and the vessel architecture was preserved,’ Davalos said.

Davalos and Rubinsky also said that the new process was more advantageous in comparison with the currently available methods for destroying tumours using heat or freezing, as these techniques may damage healthy tissue or leave malignant cells.

The researchers said that IRE allowed them to adjust the electrical current and reliable kill the targeted cells.

‘The reliable killing of a targeted area with cellular scale resolution without affecting surrounding tissue or nearby blood vessels is key,’ Davalos said.

‘IRE shows remarkable promise as a ‘minimally invasive, inexpensive surgical technique to treat cancer. It has the advantages that it is easy to apply, is not affected by local blood flow, and can be monitored and controlled using electrical impedance tomography,’ he added.

The researchers said that they would continue to advance the promising method to treat cancer, which is being featured in a special issue of Technology in Cancer Research and Treatment.