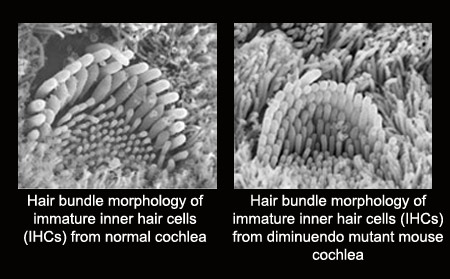 Generally known as a common sensory disorder, hearing loss apparently affects many people across the globe. Since scientists are not familiar with the precise mechanism behind this ailment, treatments introduced till date do not appear very helpful. Well, this article can probably provide the basis for treating progressive hearing loss and deafness. According to experts from the University of Sheffield, mutation of a specific microRNA named miR-96 leads to hearing loss.

When miR-96 undergoes an alteration, it supposedly halts the development of auditory sensory hair cells. Positioned in the inner ear, these cells appear vital for encoding sound as electrical signals that are then sent to the brain. In order to conduct the research, investigators analyzed mice which were unable to hear normally for around 12 days after birth. Before this age their immune hair cells are expected to trigger a genetic program that governs over the development of distinct sensory hair cells, including inner and outer hair cells.

However, in a strain of mice named diminuendo, which carries a single base mutation in the miR-96 gene, hair cell development was supposedly restricted around birth. The microRNA may usually control hair cell development. For this it probably creates an impact on the expression of many different genes related to several developmental processes at a specific stage.

Dr Walter Marcotti, highlighted, “Progressive hearing loss affects a large proportion of the human population, including new born and young children. Despite the relevance of this problem, very little is currently known regarding the genetic basis of progressive hearing loss. Our research has provided new and exciting results that further our understanding of auditory development as well as possible molecular targets for the development of future therapies.”

In the present investigation, it was pointed out that the mutation seemingly cripples the development of the mechanically sensitive hair bundle on the cell apex. It also inhibits the growth of synaptic structures at the base that presumably regulates transfer of electrical information to the sensory nerves. Researchers believe that miR-96 is a master regulator coordinating the development of the sensory cells that are crucial for hearing. It was concluded that as a mutation occurring in miR-96 reportedly paves way for human deafness, novel medications targeting these microRNA molecules can aid in treating hearing loss.

The research is published in the Proceedings of the National Academy of Sciences journal.