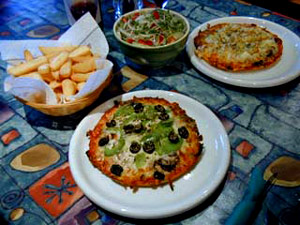 Helena Laroche, a researcher at the University of Iowa said, “Adults with children in the home ate more of those snacks and other foods that we considered convenience foods.”

“These dietary choices may be due to time pressures, advertising aimed at children that also includes adults or adults’ perception that children will eat only hot dogs or macaroni and cheese. Once these foods are in the house, even if bought for the children, adults appear more likely to eat them,” Laroche added.

The study, published in the online edition of the Journal of the American Board of Family Medicine, had researchers monitor the eating habits of 6,600 adults aged 17 to 65 who were living with children under 17 and not living with them.

Laroche cautioned, however, that these probable reasons as to why adults with children at home might eat more fat required additional research to conclude if they are indeed causes of the problem.

“We also could not determine whether there are differences between homes with younger children, ages 2 to 7, compared to homes with older children, especially teenagers,” said Laroche, who plans to further study adults’ diets.

Laroche encourages her patients to think about what they eat, particularly snacks. Tips she often shares include:

Is the U.S. susceptible to MDR-TB epidemic?