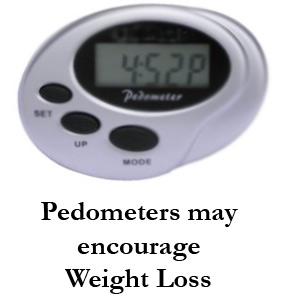 There are many people who like to quantify the amount of physical activity they do everyday and are likely to exercise more. According to a new study, the pedometer, which does just this, is thus very important.

For those who are unaware, a pedometer is a device that counts the number of steps walked per day.

The study was conducted by researchers at the Stanford University of Medicine. The findings say that those people who use a pedometer showed an increase in physical activity, resulting in further weight loss and general well being.

According to the study’s lead author, Dena Bravata, “These little devices were shown to increase physical activity by just over 2,000 steps, or about one mile of walking per day.”

Bravata conducted this study as she really wanted to find out whether she should recommend pedometers to patients.

For this very study, she had reviewed over 2,000 articles and found 26 studies that looked at the use of pedometers as a tool to motivate physical activity. A total of 2,767 people had participated in these studies. Bravata had found that pedometer users in observational studies increased their physical activity by 2,183 steps per day.

“Just over 2,100 steps might not sound that much, but it equates to a 27% increase in physical activity- which is really astounding,” added Bravata.

An additional finding of Bravata’s study says that pedometer users lost weight, with their body mass index decreasing by 0.4. It also lowered their blood pressure.

“People don’t always acieve it, but just having a goal seems to help them stay motivated and improve their physical activity,” concluded Bravata.