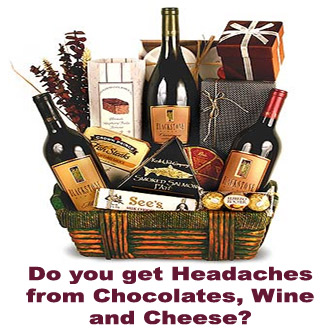 A fast and inexpensive test which can help avoid those “out of the blue” headaches that follow the consumption of certain red wines, cheese, chocolate, and other aged or fermented foods, has been developed.

The study led by Richard A. Mathies, Ph.D., a chemist with the University of California, Berkeley reported the development of a home use test, which could prove beneficial for millions of people for curing their surprise headaches.

The test is designed to detect the presence of biogenic amines, which are naturally occurring toxins that can trigger a wide range of symptoms in sensitive individuals, starting from nasty headaches to life-threatening episodes of high-blood pressure.

Biogenic amines include tyramine, histamine, and phenylethylamine, which are known to cause nausea, headaches, and respiratory disorders.

The researchers state that the new test is based on lab-on-a-chip technology and could produce results within five minutes.
“These toxins can be a serious health problem and are more common than people think. They are hidden in a wide variety of foods. Having a quick, convenient way to identify them will help consumers avoid them or at least limit their intake,” Mathies said.

Mathies suggested that biogenic amines could be dangerous in people with reduced Mono Amine Oxidase (MAO) activity or those taking MAO inhibitors, an older class of antidepressant medications, because they could potentially interact and cause dangerously high blood pressure.

The new technique, called portable microchip capillary electrophoresis, involves labelling the sample with a fluorescent dye, separating the components by applying an electric field on a special microchip, and analyzing the pattern of light produced by the sample upon exposure to a laser beam.

In the study, the researchers used a prototype device to analyze tyramine and histamine concentrations in a variety of wines (both red and white), beer and sake.

After reviewing, they found that the device accurately measured the biogenic amines present in the beverages in less than five minutes.

“Some foods have more biogenic amines than others, but you can’t tell because they aren’t listed on the food labels. I think that certain foods, especially wines, should indicate their biogenic amine content,” Mathies said.