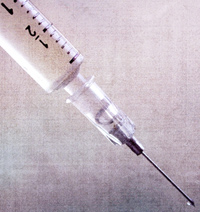 Russian scientists have developed a potential HIV vaccine. Until now, there was no such vaccine available. The Americans had high hopes of developing one, but the three vaccines developed most recently resulted in failed trials.

The specialists from Vector said there is a hope for an effective vaccine,’ said a leading geneticist, Vladimir Shumny.

Vector stands for the Russian Virology and Biotechnology Research Centre. It is located at Novosibirsk in West Siberia.

The scientist added that it was difficult to develop an HIV vaccine as the virus was constantly mutating. He also said that the polymorphous vaccine created by the research centre might help to effectively prevent HIV.

At the same time, Shumny claimed that lengthy legal procedures could complicate the vaccine’s chances of passing the necessary medical trials, not to mention getting it registered with the appropriate authorities.

‘The first phase of trials will take at least three years,’ he explained. A researcher at Vector added that it was still too early to speak about the effectiveness of the vaccine, as the first phase of the trials had not started and its safety had not yet been proven.

A total of 37 HIV vaccines have been developed but none of them have been successful, she added.