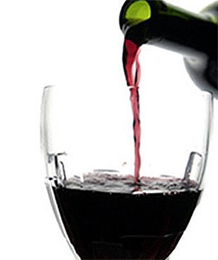 The health benefits of a glass of red wine have since long been known, but now fans of the fruity alcohol may have even more to cheer about as a study has found that it is capable of protecting humans from common food-borne diseases.

Researchers Azlin Mustapha, associate professor of food science in the College of Agriculture, Food and Natural Resources, and Atreyee Das, a doctoral student in the food science program, are conducting studies examining the inhibitory effects of numerous types of red wines, as well as grape juice, against pathogens and probiotic bacteria, which naturally reside in the intestinal tract and can be beneficial in combating, among other things, high cholesterol and tumors.

They researchers found that red wines- Cabernet, Zinfandel and Merlot in particular – have anti-microbial properties that defend against food-borne pathogens and don’t harm naturally useful bacteria like probiotic bacteria. E. coli, Salmonella Typhimurium, Listeria monocytogenes and H. pylori were among the pathogens examined. E. coli and Listeria can be fatal.

Mustapha said the most promising results involved Helicobacter pylori, which can be transmitted via food and water and is the main cause of stomach ulcers.

“Our study is a little different than those previously reported in the media. Those studies promote moderate red wine consumption for cardiovascular diseases,” she said.

“We went a step farther and asked: If red wine is already good for cardiovascular diseases, what about food-borne pathogens? If you get a food-borne illness and drink red wine, will that help decrease the symptoms a little bit? This study showed that the four probiotics tested weren’t inhibited by red wines; the pathogens were,’ she added.

In lab tests, the researchers focused on ethanol, pH levels and reseveratrol, which is a phytochemical found in grape vines and the skin of grapes. It also is responsible for the red coloring in red wines. They found that in addition to ethanol, pH and reseveratrol also may inhibit food-borne pathogens.

“It’s not just ethanol in the red wine that is inhibitory toward food-borne pathogens, but other factors which include the pH of the wine – because wines are a little acidic, and possibly the phytochemicals may have an effect,” said Mustapha, noting that grape juice produces similar results.

“We hypothesize that these phytochemicals, reseveratrol being the main one, also play a role not just as antioxidants but also may have some inhibitions against food-borne pathogens. Now, we’re concentrating mainly on the reseveratrol effects on these pathogens,” she added.