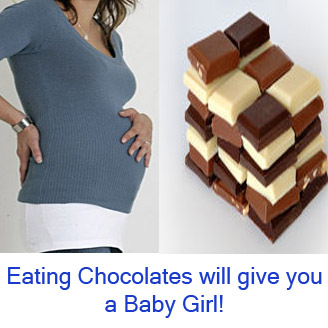 For the first time, scientists have found that what women eat could actually affect the sex of her child. The new study has suggested that eating certain foods in the run up to conception may influence the sex of the woman’s offspring.

The study which was conducted on mice lends credibility to a common belief that expecting women who wish to have a boy should eat more red meat and salty snacks, while eating fish, vegetables, chocolates and sweets could give them a girl.

The lead researcher of the study Elissa Cameron and her colleagues at the University of Pretoria in South Africa examined how changes in diet might help to influence sex ratios i.e. the proportion of males to females in a population.

For the study, the researchers altered the levels of blood sugar in female mice during conception, by feeding the mice a steroid called dexamethasone (DEX). This steroid inhibits the transport of glucose into the bloodstream.

They gave 20 mice water does with this steroid during conception and it was given during the first three days when the females were exposed to males. Afterwards, the mice were given plain water. The researchers measured the blood-sugar levels of these mice, as well as that of the 20 controlled females a number of times during this experiment.

It was found that the average blood-glucose levels in mice that received steroid dropped from 6.47 to 5.24 millimoles/litre. The team found that 53% of the pups born to the control females mice were male whereas only 41% of those born to the mice receiving DEX were male.

However, the researchers said that exactly how a drop in blood sugar causes more female births still remains a mystery. Strangely, the opposite also seems to work. Even a previous study that involved diabetic mice, found that rodents with high blood sugar levels produced more male offspring than expected.

In simple words, the results of this new study showed that a diet high in sugar could lead to more female offspring. And, the researchers who conducted this study say that the same could be true in the case of humans.

Professor Elissa Cameron said her work has raised the possibility that diet could influence the proportion of males and females in a population.