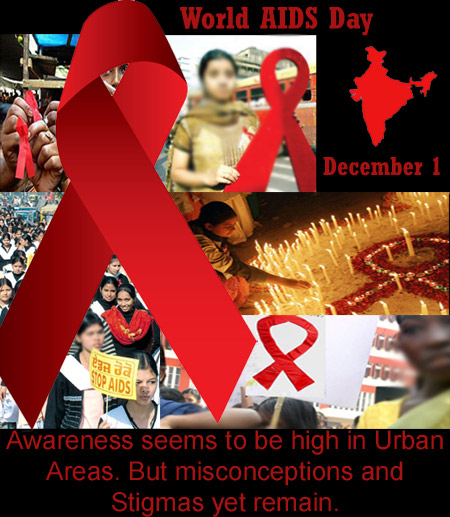 Indians in general rank HIV and AIDS as the most serious health issue that the country faces today. In spite of several awareness campaigns around 59% of the surveyed population in India still wrongly believe that there is a cure available for the disease. Today, on December 1, as the world observes World AIDS Day, India ironically continues to be plagued by wrong information on this issue, making the disease even deadlier.

A new global study has said that while 79% of Indians understand AIDS is always fatal, 59% still wrongly believe that there is a cure for it available today.

According to the study, although Indians generally recognize HIV/AIDS as the most serious health problem facing the country today, misperceptions still continue to plague the people.

Also, the study says that 65% of Indians attach of sense of stigma and shame with HIV/AIDS. This contributes to the threat of the disease acquiring an epidemic proportion. The study also said that Indians are more uncomfortable when it comes to interactive intimately with HIV positive or AIDS victims that people elsewhere in the world. Shockingly, around 44% of Indians are hesitant to share a physician with someone who has HIV/AIDS.

The study also found that 38% of those Indians who were surveyed confessed that they feel rather uncomfortable working with an HIV-positive person, while a few even said that they would not want to live in the same house as someone who has the virus.

John Demsey, Chairman, MAC AIDS Fund presented the findings of this much-needed study by saying, “The survey results illustrate the urgent need for public access in India to information on HIV and AIDS.”

“This is a wake-up call that not only do we need to improve basic education about the realities of the disease – including how it is contracted and how it is treated – we also need to do some serious on-the-ground work to alleviate the sense of shame and stigma that surrounds the disease and prevents people from being safe and seeking treatment,” added Demsey.