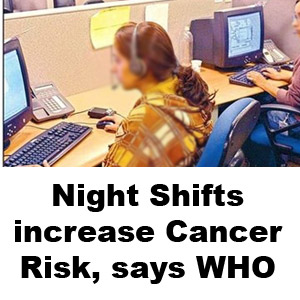 Are you stuck doing a late night shift also known as the ‘Graveyard Shift’? Working at such erratic timings is not good for one’s health for US researchers have said that there are higher rates of breast and prostate cancer among women and men whose work day starts after dark.

In fact, the International Agency for Research on Cancer (IARC), the cancer arm of the World Health organization, has added overnight shift work as a probable carcinogen. The American Cancer Society also said that it is likely to follow, because until now, the US organization had considered the work-cancer link to be “uncertain” or “unproven”.

Scientists suspect that overnight work is dangerous because it disrupts the circadian rhythm, the body’s biological clock. The hormone melatonin, which can suppress tumor development, is normally produced at night.

According to Kurt Straif, MD and his colleagues, “Shiftwork that involves circadian rhythm disruption is probably carcinogenic to humans.”

The scientist reviewed studies in which animals were exposed to light at night, disrupting their body clocks. The exact same thing happens to people exposed to the same conditions, it was found.

It was also found that people who lack sleep are prone to cancer. If one does not get enough of sleep, it makes their immune system vulnerable to attack and less able to fight off potentially cancerous cells.

According to Mark Rea, director of the Light Research Center at Rensselaer Polytechnic Institute in New York, “Timing is very important.”

Thus, if the “graveyard shift” theory eventually proves to be correct, millions of people around the world could be affected. In fact, experts have estimated that around 20% of the working population in developed countries work night shifts.

Sweeteners may increase waistlines in humans and glucose levels in mice