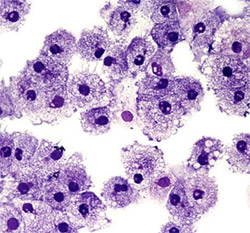 Researchers in Britain have developed an ultrasound scanner that provides extremely detailed 3D images of the deformed blood vessels within a tumor.

The researchers at University College London, Britain developed a high-resolution photoacoustic tomography scanner, which could help doctors determine the boundary between cancerous and healthy tissue during surgery.

Basically, this scanner uses laser light to “twang” cells so that they emit an ultrasound wave, which is then detected and used to form a 3D image. This shoots very short pulses of non-harmful near-infrared laser light at a tumor, and as the light is absorbed by tissue, the cells heat up and expand very slightly, creating an ultrasound wave that can then be detected by a sensor.

The intensity of the ultrasound wave depends on how well the tissue absorbs the near-infrared radiation, which produces high-contrast images of blood vessels because haemoglobin is very absorbent at these wavelengths.

“Our scanner is best suited to providing high-resolutions images at a short range, but the technique could be used to image tumors a few centimeters into the breast,” Paul Beard who led the research was quoted as saying.

In order to convert the reflected ultrasound into a high-resolution 3D image the researchers had to create a new ultrasound sensor as well, the report said.

The sensor consists of a thin layer of a polymer sandwiched between two reflective layers. The outer layers only reflect certain wavelengths of light and the laser light used to penetrate a patient’s tissue shines straight through all three layers. The acoustic signal generated using the infrared is then picked up by the polymer layer.