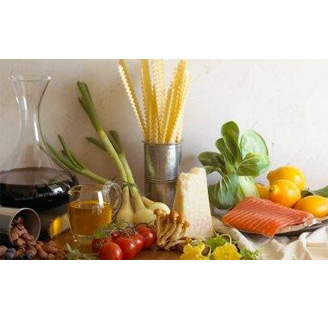 Some time ago, we reported about a study which showed that a Mediterranean diet rich in fruits, vegetables and nuts during childhood could protect against symptoms of asthma and nasal allergies. Now, a study says that women who follow the famous Mediterranean diet while pregnancy may also be shielding their baby from childhood asthma and allergy.

The research was headed by Leda Chatzi, a doctor at the Department of Social Medicine at the University of Crete, Greece.
Doctors had recruited 507 women who attended an antenatal clinic on the Mediterranean island of Menorca in 1997, and quizzed them at length about their dietary habits.

The study found that the children’s dietary intake at this age appeared to have little impact on whether they had these problems. What really made a difference was what their mothers had eaten while pregnant.

One third of the mums-to-be had a low rating on the Mediterranean Diet Score, a measurement of consumption of fruits and vegetables, olive oil, fish, wholegrain cereals, legumes and nuts. Two-thirds had a high score.

Antioxidants are known to have a protective effect against asthma in young children, while the fatty acids shield against inflammation, a key factor in the complex problem of asthma, say the authors.

The Mediterranean diet, which is also associated with longevity, also incorporates moderate amounts of red wine. However, alcohol consumption is prohibited in pregnancy and was thus not included in the study.