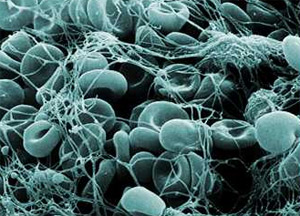 Researchers have said that ankle sprains, muscle pulls and other minor leg injuries may be a major but very unrecognized cause of blood clots in the veins.

The researchers said that the risk of such clots lasts for about 10 weeks after a leg injury and may be due to damage to the blood vessel wall or the fact that even minor injuries may cause people to be less active, increasing the likelihood of clot development,

Karlijn van Stralen and colleagues at Leiden University Medical Center in the Netherlands said they reached the conclusion by looking at 2,471 patients who developed venous thrombosis, as such clots are known, between 1999 and 2004, and another 3,534 people who did not.

Of the people who had a blood clot, 289 had a minor leg injury that did not require surgery, a plaster cast or extended bed rest. This summed up to 11.7 percent of the 2,471 blood clot patients.

In comparison, just 4.4 percent of people who did not have a blood clot reported some minor injury to the leg. That suggests the injuries tripled the relative risk, Van Stralen’s team concluded.

“Because minor injuries are common, they could be major contributors to the occurrence of venous thrombosis,” the authors wrote in the Archives of Internal Medicine.

Each year from one to three of every 1,000 people develop blood clots which block the veins, usually in the legs or thighs. Among the recognized causes are surgery and immobility, including that which can occur during extended air travel. The problem can become life threatening if a part of the clot breaks off, travels to the lungs and blocks an artery.

Doctors who treat people for such injuries should be aware of the risk and may want to help their patients prevent blood clots, by moving around more often or by other means.

Sweat may lower the risk of exercise-induced asthma