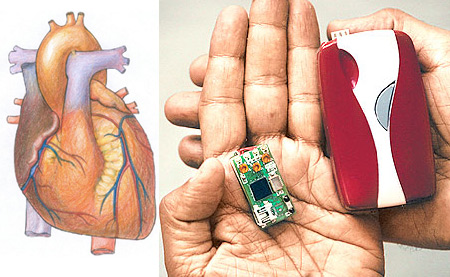 The Indian Institute of Technology in Bombay, commonly referred to as IIT-B has come up with a great and very useful invention in the form of a toffee sweet-sized silicon locket. It happens to be the world’s smallest cardiac monitor which can be worn by heart patient.

The tiny silicon computer is able to store around a week’s electrocardiogram data (ECG). This locket will allow heart patients to monitor the condition of their heart without the need to keeping visiting a hospital.

According to IIT professor Rakesh Lal, of the School of Bioscience and Bioengineering, who actually conceptualized the project together with professor Mukherji, “I would be the first to buy one for my mother. The basic device is like plug-and-play. There isn’t another product like the silicon locket.”

Cardiologist Devi Shetty says that there is a huge demand for user-friendly cardiac monitors in India. As of now, ECG monitors are available in the market, however they are around the size of a walkman if not bigger.

“Indians are genetically three times more vulnerable to heart attacks than Europeans. The average age of my patients in India is 45 years Fathers bring their young sons for bypass grafting,” confirmed Dr. Shetty.

Basically, algorithms are fed into the silicon locket’s system and this enables the device to distinguish between jerks from running, working out or climbing stairs and arrhythmic heart beats.

The silicon heart locket is worn with five electrodes on the chest, while a sensor in the locket records the heart’s electrical activity, known as ECG in medical terms. If it detects any abnormalities, it can automatically transmit the last few seconds of ECG data to a central server using a mobile phone interface.

Moreover, when the user feels uneasy, he can press a locket button to mark that data so a doctor can later scrutinize the marked segments and check the heart’s activity before the irregularity took place.

Also, when connected to a mobile phone, the silicon locket can be programmed to send text messages containing marked data to a doctor. Software in the locket forwards the data to the mobile, which then sends the SMS.