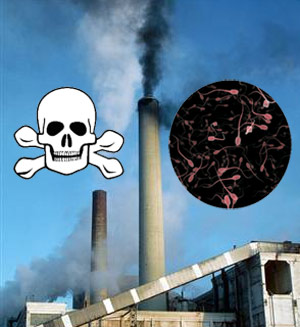 Everyone knows that air pollution is a threat to their lungs. However, it also seems to be doing damage to sperm. A new Canadian study has revealed that pollution can cause not only a fall in one’s sperm count, but also sperm mutations which “have the potential to affect disease incidence in the descendants of exposed individuals.”

The study was published in the US Proceedings of the National Academy of Sciences this week itself. It was carried out by Health Canada on mice in Toronto.

Canadian researchers and some from the US National Center for Toxicological Research studied the impact of polluted air from Hamilton Harbour (in Toronto) on mice kept in a shed for 10 weeks.

This shed was constantly exposed to polluted air coming from two steel mills and a highway that lay within its 2km radius. After ten weeks passed, the researchers compared the impact of pollution on these mice to another group which breathed filtered, pollutant-free air inside a chamber.

The researchers found a 60% increase in sperm DNA mutation in the mice exposed to polluted air, compared to those who inhaled filtered air.

They were surprised to find that the sperm mutations persisted even after the mice were no longer exposed to polluted air. The persistence of the sperm DNA mutation indicated that pollution had changed in the germ-line cells which produce sperm.

The mutated sperm’s genetic composition has the potential to affect disease incidence in eth descendants of exposed individuals,” the researchers warned.

The study has said “increased germ-line DNA mutation frequency may cause population-level changes in genetic composition and disease,” in view of the rising pollution levels all over the world.