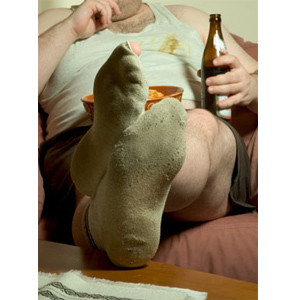 If you are a couch potato, you must know that this could make you a whole decade older biologically than someone who is physically alive. This was proved in a British study of people’s “chromosomal clocks”.

Researchers at St.Thomas Hospital in London measured the lengths of telomeres in the white blood cells of around 2,401 twins. Telomeres are nothing but the DNA that bookends our chromosomes.

They found that people who did not exercise in their leisure time had shorter telomeres than people who were active.

It is known that telomeres shorten each time a cell divides and when they become too short a cell can no longer divide. Thus, it can be said that telomeres act as a sort of timer counting down our biological age.

The researchers found that on an average, the least active, (those just getting around 16 minutes exercise per week) had telomeres 200 base pairs shorter than the most active (exercising 3 hours a week). This means the less active people would be around 10 years older biologically.

Interestingly, these very researchers had proved that smoking and obesity could shorten telomere length by the equivalent of 10 years. They found that exercise and telomere length were linked independently of whether people smoked or were overweight.

Accounting for whether or not participants had a chronic disease (possibly making them sedentary) did not change the findings either, suggesting that other factors linked with an inactive lifestyle affect biological age, they said.

One of those factors seems to be psychological stress, which could translate into oxidative stress, a source of free radicals that can cause DNA mutations and shorten telomere length.

According to the researchers, although exercise can alleviate such stress, it only seems to help with cellular ageing if done in people’s leisure time.

Slogging away in manual jobs, on the other hand, tends to have the opposite effect and can shorten telomeres because of “the psychological stress of being in the lower social pecking order,” according to leading researcher Tim Spector.

Telomere length can be inherited, but even after analyzing a subgroup of twin pairs, who share both genetics and upbringing, “the twin who was doing more exercise had longer telomeres – on average, an 88 base pair difference,” Spector said.

Spector said that whether having shorter telomeres means a person dies younger is unproven, but the person is “more likely to have age-related diseases,” such as Alzheimer’s. Nevertheless, although telomere length cannot be restored, it may be possible to slow down the process by starting to exercise, he added.