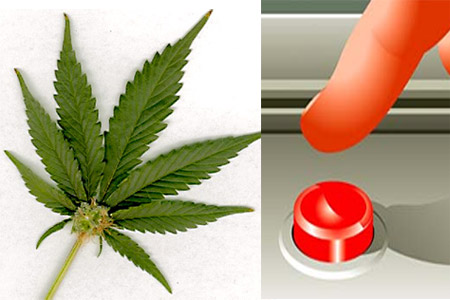 Now, marijuana will be available at just the touch a button! Sadly, it will NOT be available to all; instead only those who have been prescribed with it can avail of this new technology.The first ever vending machine that dispenses medical marijuana debuted in Los Angeles. The herb marijuana is prescribed by doctors to many people who suffer from chronic pain, Alzheimer’s Disease and other nerve-related disorders.

As of now, there are three medical marijuana dispensaries set up in Los Angeles. Those who wish to purchase some of the ‘drug’ can do so, but not without giving their fingerprint and prescription. Further, they will also be photographed.

This vending machine, called PVM (Prescription Vending Machine) which is a black, armored box was invented by Vincent Mehdizadeh, who owns a medical marijuana dispensary called Herbal Nutrition Centre in LA. He said that it took him over half a year to design and patent the device.

The machines can obviously be used solely by those who have prescriptions for the drug in order to lessen their chronic pain, loss of appetite, nausea and other health issues that marijuana has been shown to improve the condition for.

Those who require some of the stuff, will have to present their prescription for approval and will also have to undergo some security measures before they are able to rely on the machine’s 24-hour vending service.

They will then be able to purchase a pre-paid card with a magnetic strip, after which they can chose the dosage they need (either 3.5gms or 7gms). They can chose between five different strains of marijuana which include:

So once the patient has his/her card, it will of course be verified each time and so will their fingerprints. If they pass the test, the marijuana will be dispensed to them in a vacuum-sealed package.

However, patients will only be limited to a purchase of 1 ounce per week. Further, the marijuana vending machines will be protected at all times by armed security guards.

It still remains to be seen whether the invention of the marijuana vending machine will survive the law, which has become tough in recent times.