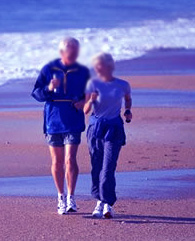 According to a report, a healthy lifestyle during one’s early elderly years could be associated with a greater probability of living to an age of 90 in men. Such a lifestyle includes weight management, exercising regularly and not smoking.

Yet another report has found that although some people survive up to 100 years or beyond by avoiding chronic diseases, other centenarians live with such conditions for many years without becoming disabled.

Laurel Yates, M.D., M.P.H of Brigham & Women’s Hospital, Boston, and colleagues studied a group of 2,357 men who were participants in the Physician’s Health Study. At the beginning of the study, in 1981 to 1984, the men (average age 72) provided information about demographic and health variables, including height, weight, blood pressure and cholesterol levels and how often they exercised. Twice during the first year and then once each following year through 2006, they completed a questionnaire asking about changes in habits, health status or ability to do daily tasks.

A total of 970 men (41 percent) lived to age 90 or older. Several modifiable biological and behavioral factors were associated with survival to this exceptional age. “Smoking, diabetes, obesity and hypertension significantly reduced the likelihood of a 90-year life span, while regular vigorous exercise substantially improved it,” the authors write. “Furthermore, men with a life span of 90 or more years also had better physical function, mental well-being, and self-perceived health in late life compared with men who died at a younger age. Adverse factors associated with reduced longevity—smoking, obesity and sedentary lifestyle—also were significantly associated with poorer functional status in elderly years.”

“Although the impact of certain midlife mortality [death] risks in elderly years is controversial, our study suggests that many remain important, at least among men,” the authors conclude. “Thus, our results suggest that healthy lifestyle and risk management should be continued in elderly years to reduce mortality and disability.”

In the second study, Dellara F. Terry, M.D., M.P.H., of the Boston University School of Medicine and Boston Medical Center, and colleagues studied 523 women and 216 men age 97 or older. These centenarians completed questionnaires about their health history and functional ability by mail or telephone. Participants were split into groups based on sex and the age at which they developed diseases typically associated with aging: chronic obstructive pulmonary disease, dementia, diabetes, heart disease, hypertension, osteoporosis, Parkinson’s disease and stroke. Those who developed these conditions at age 85 or older were classified as delayers, whereas those who developed them at a younger age were termed survivors.

Of the participants, 32 percent were survivors and 68 percent were delayers—“thus, morbidity [illness] was not compressed toward the end of these exceptionally long life spans,” the authors write. “Yet, centenarians who had developed heart disease and/or hypertension before age 85 years and still survived to 100 years demonstrated similar levels of function (‘independent’ in the case of men and ‘requires minimal assistance’ in the case of women) as those who delayed morbidity until after age 85 years.”

Though fewer men than women survive to extremely old age, the male centenarians in this study appeared to have better mental and physical function than their female counterparts. “One explanation for this may be that men must be in excellent health and/or functionally independent to achieve such extreme old age,” the authors write. “Women on the other hand may be better physically and socially adept at living with chronic and often disabling health conditions.”