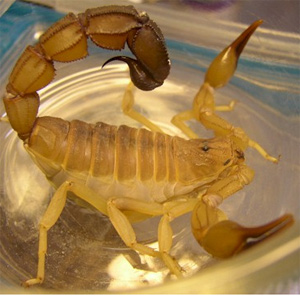 Last year, US scientists found out that scorpions’ venom could help to treat a number of types of cancer. Now, researchers from the Hungarian Academy of Sciences, Emory University and the University of Calgary have found that a peptide in scorpion venom known as GaTxl could help to control cystic fibrosis.

Cystis fibrosis is caused by a mutation in a gene called the cystic fibrosis transmembrane conductance regulator (CFTR). The loss of CFTR proteins stops water from flowing into or out of the airway cells resulting in abnormally thick, sticky mucus that commonly causes blockages that obstruct airways and glands.

According to Nael McCarty, an associate professor in the Georgia Institute of Technology’s School of Biology, peptide toxins from scorpions, snakes, snails and spiders paralyze prey by blocking nerve or muscle ion channels so the prey can’t get away.

“Those toxins have been enormously useful for studying the potassium, calcium, and sodium channels that they interact with, but this is the first toxin discovered that potently binds to and selectively and reversibly inhibits a chloride channel of known molecular identity,” he said.

For the study, the researchers used high-performance liquid chromatograph to extract the novel GaTxl peptide from the complex venom of the Giant Israeli Scorpion.

“We chose this technique because each different peptide has slightly different water solubility and hydrophobicity properties, allowing them to be separated,” said Julia Kubanek, an associate professor with joint appointments in the Georgia Tech School of Biology and School of Chemistry and Biochemistry.

They found that GaTx, a peptide that bound to the cytoplasmic side of the CFTR protein.

GaTx1 could be used to inhibit the channels from opening, in turn decreasing production of the watery diarrhea that often leads to death in patients suffering from cholera and other diarrheal diseases. GaTx1 has the potential to be used as a drug to help patients with cystic fibrosis and these other secretory diseases,” said McCarty.