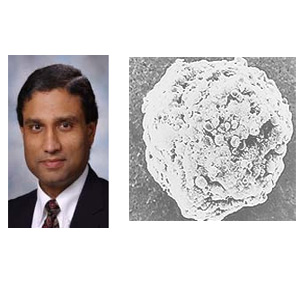 An Indian-origin scientist has developed a treatment against ovarian cancer. The treatment has shown rather encouraging results because it targets a protein that causes tumours to grow.

Dr. Sood has developed a short interfering RNA (siRNA) product that cuts in IL-8 expression, and reduces the tumour size by limiting its blood supply.
“The protein IL-8 is a potential therapeutic target in ovarian cancer,” Dr. Sood said.

“This comprehensive analysis–with human data, animal data and lab experiments to highlight the molecular mechanisms involved–helps us develop the new targets needed for a more effective approach against ovarian cancer,” said the doctor.

Interleukin-8 is over expressed in many types of cancer and has previously been shown to promote tumour growth, new blood vessel growth known as angiogenesis, and metastasis, the spread of cancer to other organs.

“In the long run, this research will have applications in other cancers as well,” Sood said.