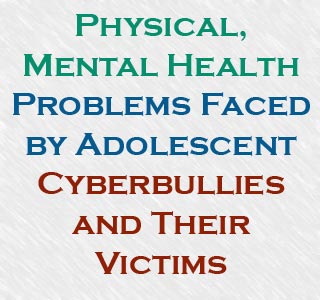 Psychiatric and physical problems are mostly reported by adolescent victims and perpetrators of electronic bullying. Previous analyses highlight that cyberbullying is a destructive, deliberate, frequent act. This is mainly done with the help of mobile phones, computers or other electronic forms and affects individuals who fail to protect themselves.

A U.S. survey revealed that 12 percent individuals were aggressive to someone online, while 4 percent were victims of aggression. They further highlighted that 3 percent of the individuals were both aggressors and targets. Experts distributed questionnaires among 2,438 Finnish kids specifically in the seventh and ninth grade.

Authors share, “There are several special features regarding cyberbullying when compared with traditional physical, verbal or indirect bullying such as the difficulty of escaping from it, the breadth of the potential audience and the anonymity of the perpetrator.”

Authors elucidate, “Of those who had been victimized, one in four reported that it had resulted in fear for their safety. The feeling of being unsafe is probably worse in cyberbullying compared with traditional bullying. Traditional bullying typically occurs on school grounds, so victims are safe at least within their homes. With cyberbullying, victims are accessible 24 hours a day, seven days a week”.

Six months prior to the study 4.8 percent participants were targets of cyberbullying. Whereas 7.4 percent were cyberbullies and 5.4 percent were observed to be both victims and perpetrators of cyberbullying. Experts highlighted that being a cybervictim only was linked to various factors. These factors included living in a family with other than two biological parents; perceived difficulties in emotions, concentration, behavior, or getting along with other people; headache; recurrent abdominal pain; sleeping difficulties and not feeling safe at school.

Authors reveal, “There is a need to create cyberenvironments and supervision that provide clear and consistent norms for healthy cyberbehavior. Clinicians working in child and adolescent health services should be aware that cyberbullying is potentially traumatizing. Policy makers, educators, parents and adolescents themselves should be aware of the potentially harmful effects of cyberbullying.”

Individuals who were cyberbullies only were associated with various concerns. These concerns included difficulties in emotions, concentration, behavior, or getting along with other people; hyperactivity; conduct problems; infrequent helping behaviors; frequently smoking or getting drunk; headache and not feeling safe at school. Individuals who were both cyberbullies and cybervictims were linked with all these factors too. Findings underline that cyberbullying is a significant type of harmful behavior.

These findings are according to a report in the June issue of Archives of General Psychiatry.