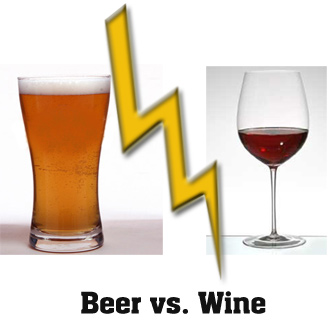 Numerous studies have shown that drinking wine in moderation offers a host of health benefits. But, now researchers have said that wine affects the brain in a much more adverse manner when compared to beer.

The studies bring out the good affects on wine on the heart such as lowering cholesterol and high blood pressure and attribute this to the presence of the Resveratrol molecule. But, this study in particular happens to be the first to examine wine in relation to its actions to the brain.

According to researchers at the Göttingen University in Germany have said that wine drinkers have a smaller hippocampus compared to beer drinkers. For those who are unaware, the hippocampus is a vital area of the brain that plays a very important role in memory and spatial awareness.

For the study, the researchers scanned the brains of participants and then compared them with healthy adults. Moreover, the study participants were also asked to mention their drink of choice.

The researchers revealed that the hippocampus in wine drinkers was 10% smaller than that of healthy adults. In fact, in non-drinkers, this area of the brain measured 3.85ml, while in wine drinkers it measured just 2.8ml.

The study also found that beer drinkers had lower levels of a compound known as homocysteine. This compound plays a role in the development of heart disease, strokes and dementia.

You must be informed that alcohol in any form is bad for one’s health. However, previous studies have shown that moderate intake wine offers numerous health benefits.