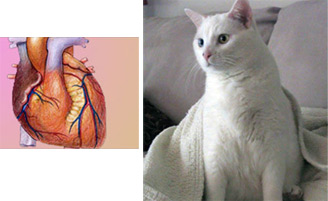 According to yet another study, a cat at home could cut your heart attack and stroke risk by almost a third.

A team of international researchers has found that owning a cat helps in relieving stress and anxiety, which is known to help protect against cardiovascular problems by lowering blood pressure and reducing the heart rate.

“The logical explanation may be that cat ownership relieves stress and anxiety and subsequently reduces the risk of heart disease,” said lead author Prof Adnan Qureshi of the Minnesota University.

According to the researchers, one reason could be that stroking the pet could cut the level of stress-related hormones in the blood.

The team came to the conclusion after analyzing a data of 4,435 adults, aged between 30 and 75, about half of whom owned a cat. Subsequently, the team tracked rates of death from all causes, including heart and stroke.

The cat owners “appeared to have a lower rate of dying from heart attacks” over 10 years of follow-up compared to feline-free folk, Proffesor Qureshi said, adding the magnitude of the effect — a 30 per cent reduction in heart attack risk — “was a little bit surprising”.

Cat owners were still found to have a much reduced chance of developing strokes or heart attacks when the team took factors known to trigger heart disease, including high cholesterol levels, smoking and diabetes, into consideration.

“We certainly expected an effect, because we thought that there was a biologically plausible mechanism at work. But the magnitude of the effect was hard to predict,” Prof Qureshi said.

In February this year, we had reported about a similar study that also showed how cats can decrese the risks of heart attacks and strokes.